We were sitting in a hostel in Tallinn after a big night out, trying to figure out what to do next, when the idea of Vietnam came out. Few weeks later, we were on a plane to Ho Chi Minh and spent our first days looking for a motorbike. According to travel blogs, riding is the best way to explore the country.

I skip the part about our luggage arriving six days later and us wearing sneakers and jeans with 35 degrees. Just as a side note, shopping in Vietnam can be a real adventure when you ask for European-average shoe size and Vietnamese laugh thinking it is a joke.

We finally found the beast : a 125cc manual bike. After test rides and price negotiations, we were ready for the first ride to Can Tho. 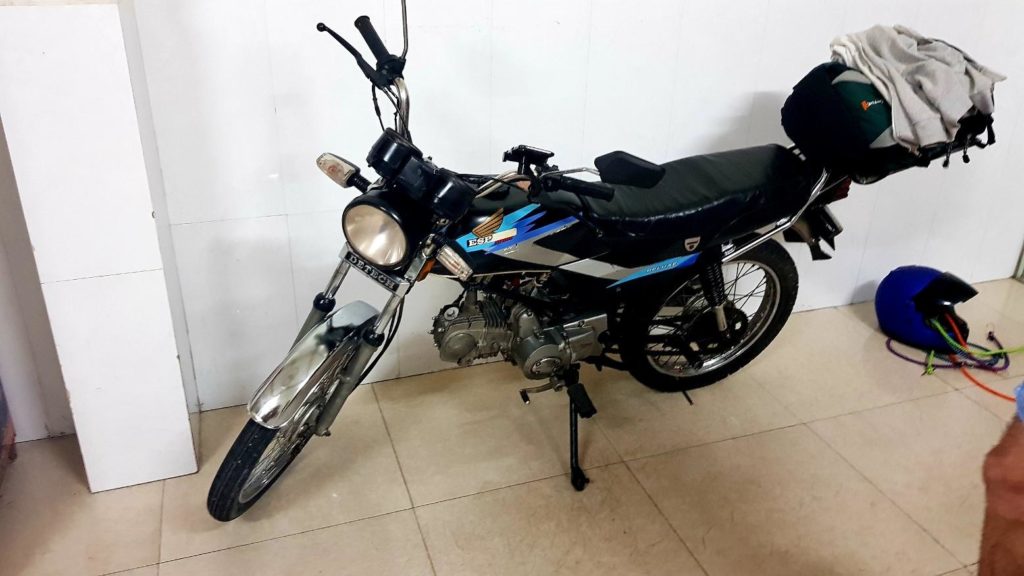 We were so excited that we decided to leave after 4pm, at the same time as all Vietnamese workers. Since I haven’t posted a video here, try just to imagine 100s of motorbikes and scooters around you, each having its own traffic regulation, some transporting their whole family and pets and all looking at the two white people in the middle of this mess.

However, apart from that and the pain in our ass, this first ride was sign of freedom and the beginning of an aventure. The travel days were awesome thanks to the landscapes, and our motorbike was as cool as expected.

In Can Tho, we discovered a really rural Vietnam, far from the madness of Ho Chi Minh. We warmly recommend the Mekong Delta Tour/floating markets, in a boat driven by a local. You will have to wake up early, but it is worth it. The floating market is amazing, it is a real city on water, everyone selling its fruit, vegetables and even coffee. Each seller shows its goods on a mast, kind of the same advertisement than the signs over the aisles in a supermarket. The rivers and canals give actually access to local farmers to sell their goods before making their way to Ho Chi Minh or somewhere else. The atmosphere is so unique compared to other cities, you have the feeling of being in another world, another period. Also, who has ever had lunch on the Mekong delta in the middle of this dense jungle? It is clearly a must see for travellers. 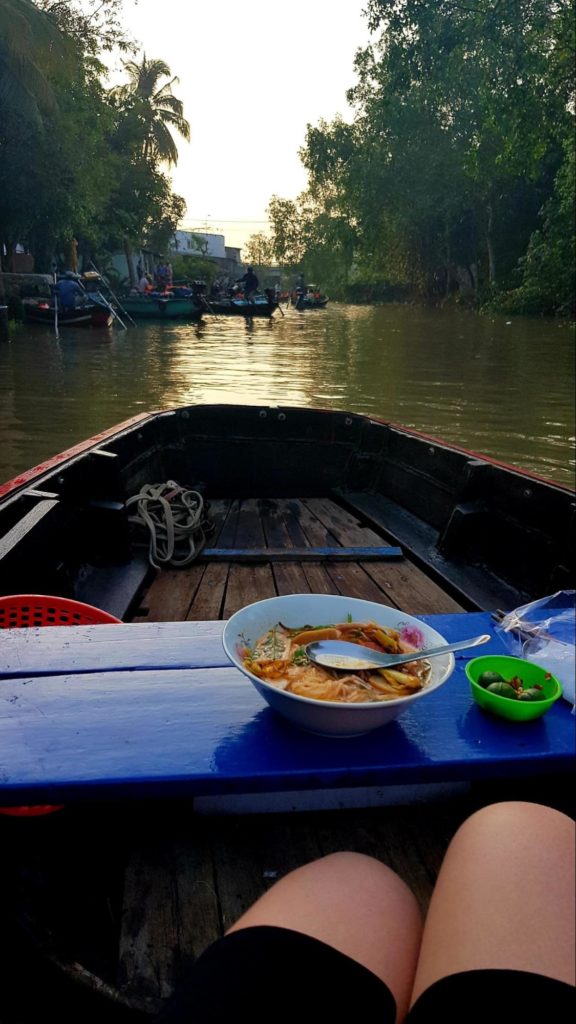 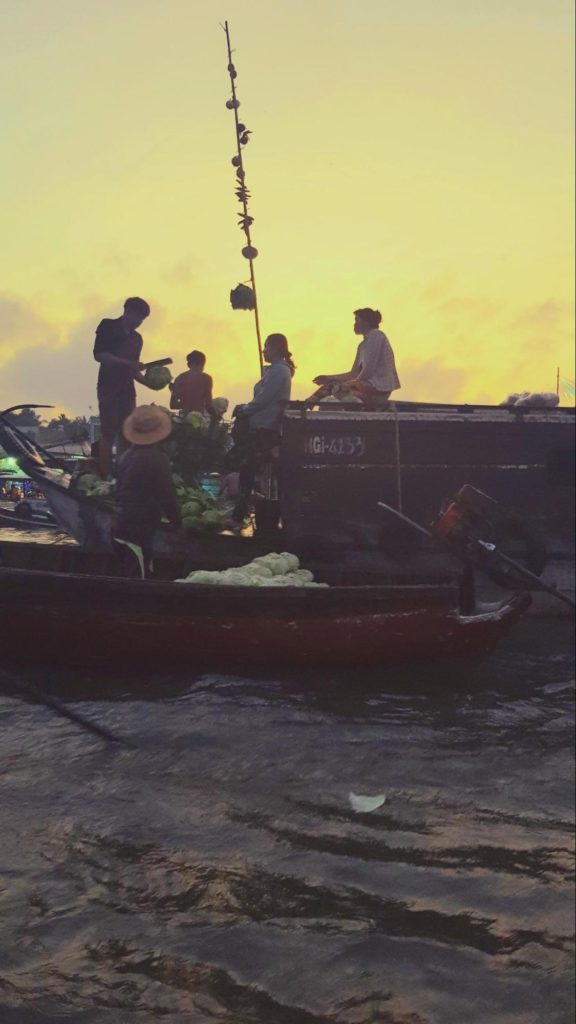 Next stop was Phu Quoc Island. After a few months spent in Tallinn‘s darkness, sea and sun were well deserved. Pristine beaches, not lots of tourists and nice snorkelling tour were part of the winning combo. 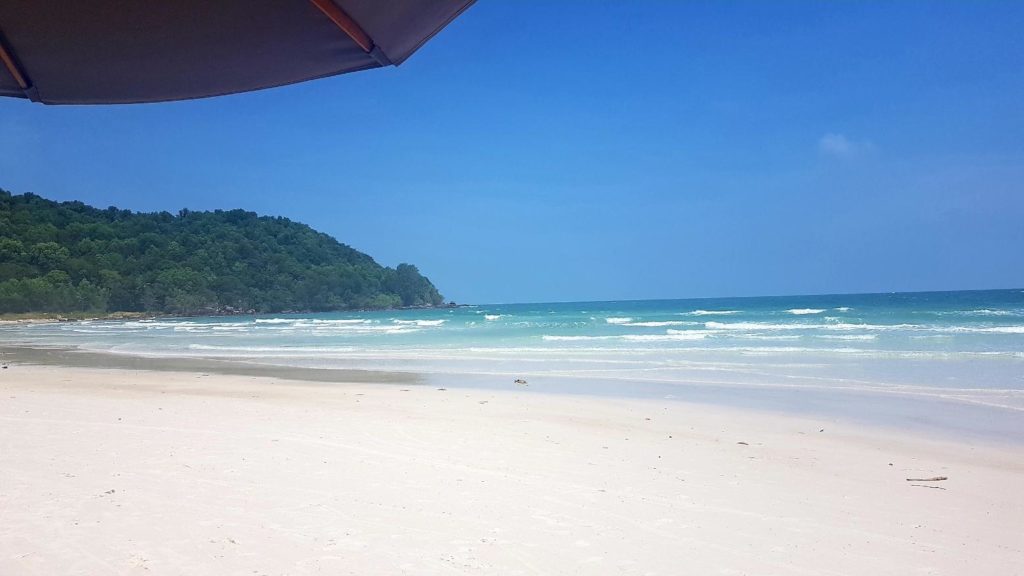 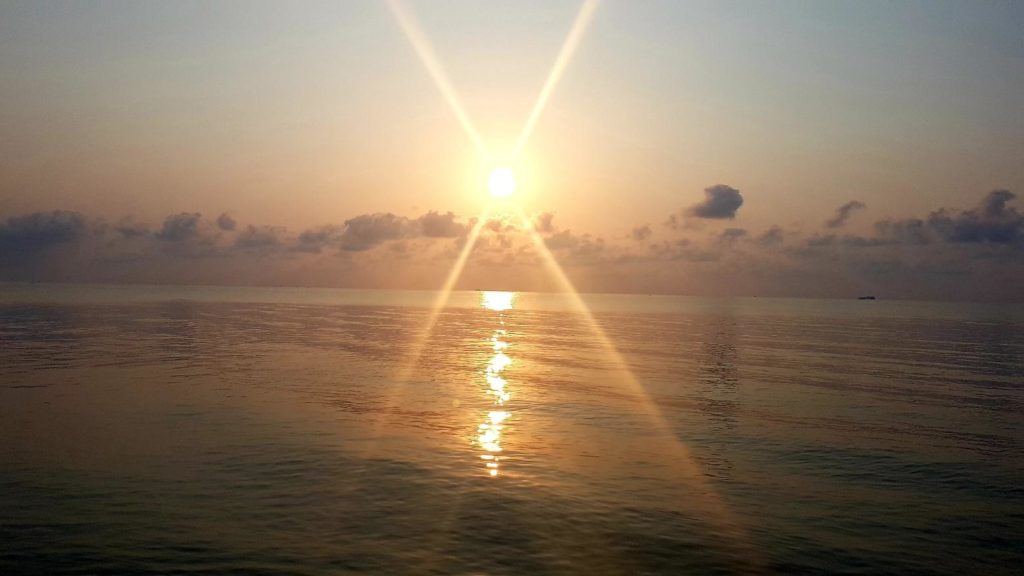 Few days later, we got our luggage back. No need to specify that we had too many bags now after having bought first necessities and new clothes. Long story short, during our ride back north, the racks broke in the middle of nowhere and our luggage landed on the street. One thing we learnt that day was that hitchhiking signs are not the same than in Europe : all people just smiled and said hello to us.

Whatever, the advantage of riding in Vietnam is that you will always find someone able to help you with repairs, and i can tell you, this happened to us a few times. Be prepared to spend more time on the road and get lost in the countryside. It is all about taking time and not being in a rush. Anyway, this is what real travels are about, right? 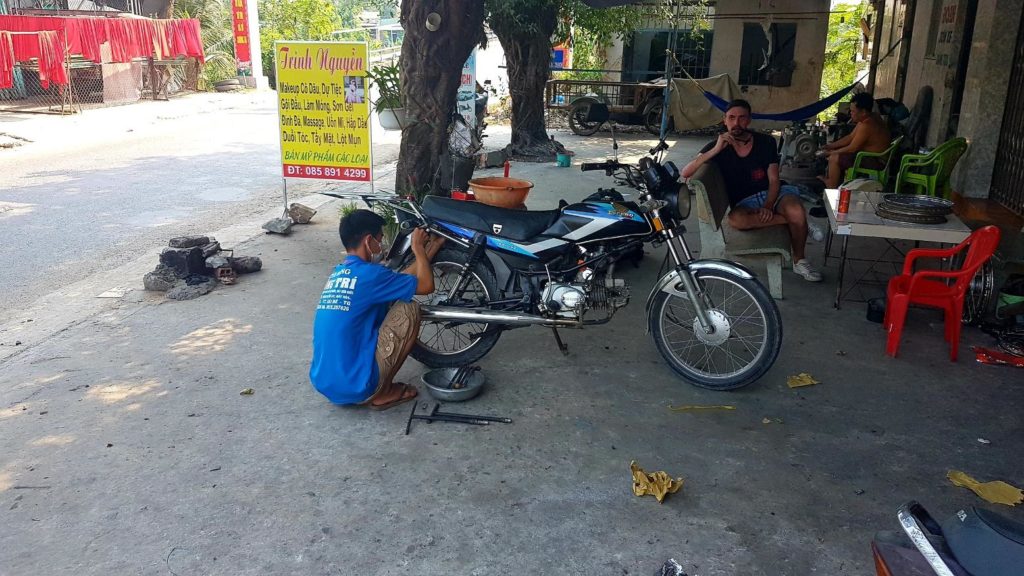 We finally reached Cat Tien National Park. Being located around 150km far from Ho Chi Minh, it offers a nice getaway for people looking to escape the bustle of the big city. It is a 72,000 hectare park offering a rich and diverse flora and fauna. It is recognised by UNESCO as a World Biosphere Reserve. Unfortunately for us, due to Coronavirus spread, most of the park was closed to public.

We then continued our ride to Da Lat and Nha Trang.

The hill town of Da Lat offers a good change of atmosphere with a refreshing cool climate while other cities in Vietnam may be very hot and humid. Some people call it “Le Petit Paris” due to French colonial times. It is quite famous for its variety of flowers and vegetables coming from the farmlands around. The ride to and from Da Lat was stunning. It went above our expectations. It was definitely the best ride we had in Vietnam. 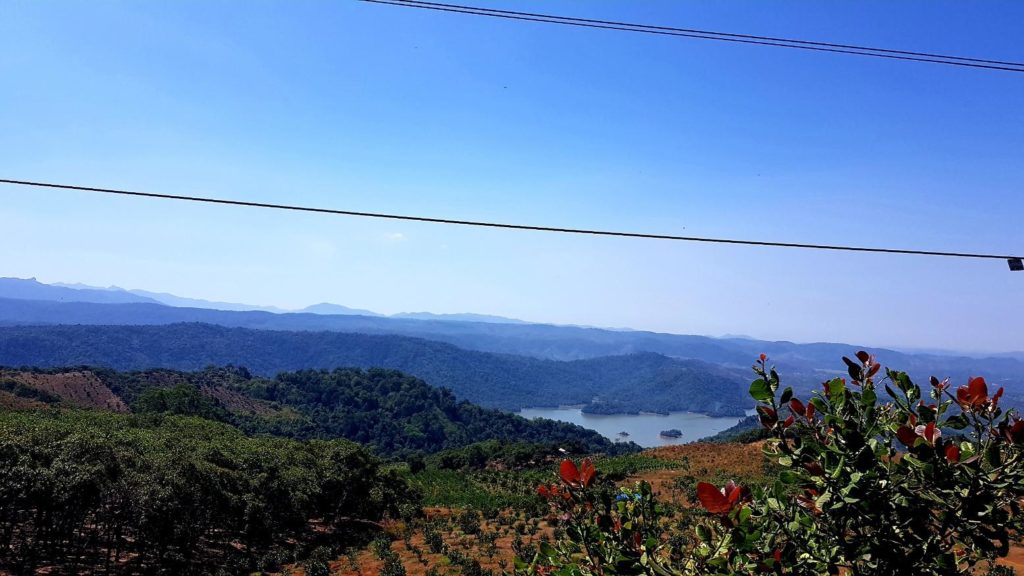 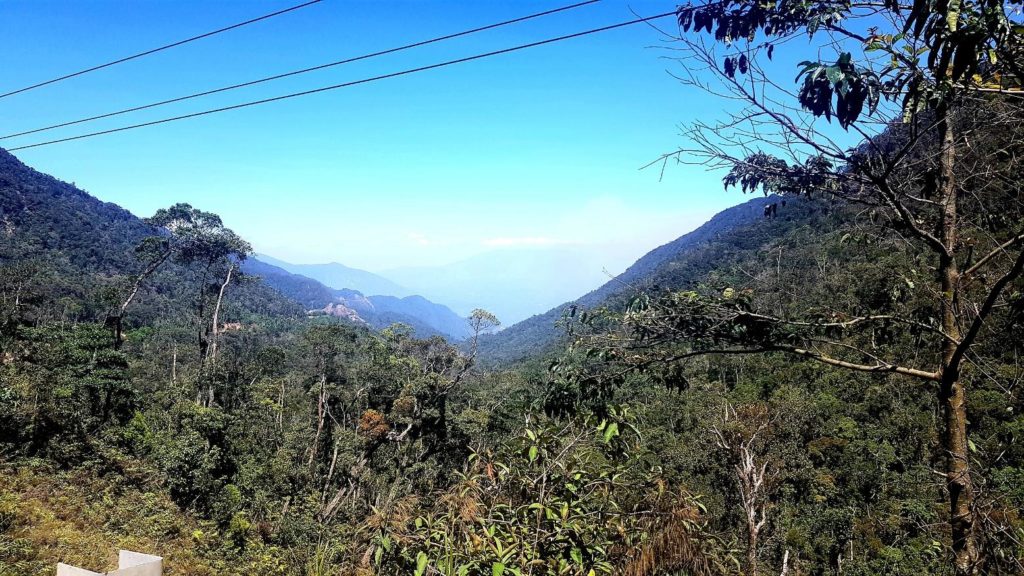 Nha Trang is located around 400 km up north to Ho Chi Minh. There is something you notice quite quickly : it is the Russian beach city. Locals were talking to us in Russian, shops were held by Russians and the beach was crowded by Russians. Have you ever noticed the Russian way of getting tanned? Standing on the sand… you could spot the non Russian ones laying down as we do in Europe. To be honest, we almost forgot we were in Vietnam. It seems that the Navy began using Cam Ranh port as their biggest territory base out of Russia which explains the Russian influence. Whatever, if you like chilling on the beach and partying in an expensive and touristic spot, then this place might fit.

I wish i could tell you lots of other stories but the truth is that after these two weeks, Coronavirus crisis and fear really reached Vietnam and Europeans were not welcome anymore. We took the hard decision to leave the country before borders close and to sell our bike in a rush… We had to skip all the nice places we planned to go to, to skip the rides we were looking forward to doing, and took a plane to reach Hanoi from where we could leave the country.

We had not much time in Hanoi but from what we could see, it is a huge city, full of hidden gems. We actually preferred it to Ho Chi Minh, it felt more liveable and inviting.
We are now in Mexico, but will come back one day to finish our Vietnamese trip! In the meantime, we can only advise travellers to add Vietnam by motorbike to their bucket list. 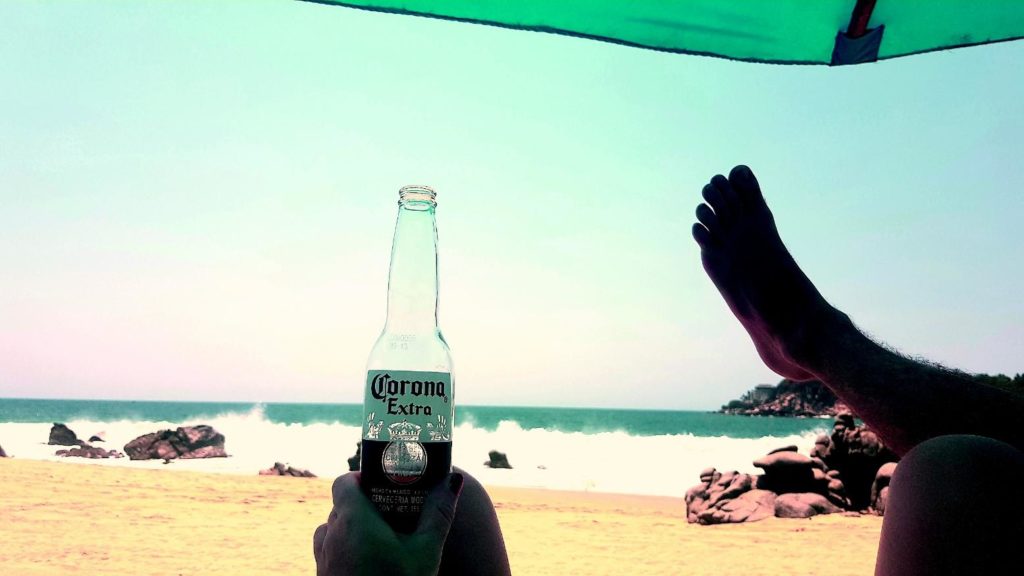 This article was written by Alexandra, a member from Luxembourg who volunteered in Tallinn for a bit. It’s her first contribution to World Wide Travellers, and I’m sure you’ll enjoy it as much as we have. Following there is a message from who was her manager, about what an amazing person Alexandra is.

I know I shouldn’t say this but Alex was my favourite, in fact she was many people’s favourite. When I offered her a volunteering position she was somewhat reluctant to accept it ,but did agree to stay for just a few days. Fortunately, she ended up staying for three months and was a part of an amazing team we had here. I hope to see her again somewhere else in the world. Nyree – Manager at Lai 22 Hostel. Tallinn, Estonia