One Saturday morning I felt an urge to set off on a trip and explore more from Estonia, the country I moved to a few months ago. Unfortunately, I woke up quite late, and in this time of the year, days are getting rapidly shorter, so I ended up with less than four hours of daylight on my hands. But the desire to explore was invincible. So I packed my backpack and got outside with no clear plan.

“Go where your feet will lead you”, said a childish voice in my head, reminding me of a silly game I used to play with my sister when we were little. At every crossroad, you must “follow your feet” – you must rely on your intuition and look for signs around you. That’s the only way you can find a treasure.

Going after green traffic lights and funny words on billboards, I found myself in Ülemiste, a district in the eastern part of Tallinn with modern high-rise buildings, the largest shopping centre and an airport. I looked around rather disappointed, as that was quite different from what I expected. No treasure in sight.

But the game was not over yet, I couldn’t give up so easily. I passed through the concrete labyrinth and spotted water on the horizon. I reached the borders of Tallinn, around which Lake Ülemiste spreads. According to an Estonian national epic Kalevipoeg, it is a lake out of tears. When the hero’s father Kalev died, his wife Linda cried for him for seven days and nights on a tombstone she brought for his grave, creating the lake around her.

At the time, I didn’t know about the myth but I instantly felt I’m on the right way. I took a road around the lake, leading me to a forest. And there, buried in moss and fallen leaves, lay a graveyard – or rather barely noticeable ruins of once monumental Baltic Germans graves that survived many dramatic events of the 20th century. It was the Mõigu cemetery, as I was about to find out soon.

At first, I noticed a lone cross from the pathway. Then a tumbled headstone with a readable date of death, then a broken urn and a piece of a candle box. I couldn’t help myself. I had to delve deeper in the forest and find out more. 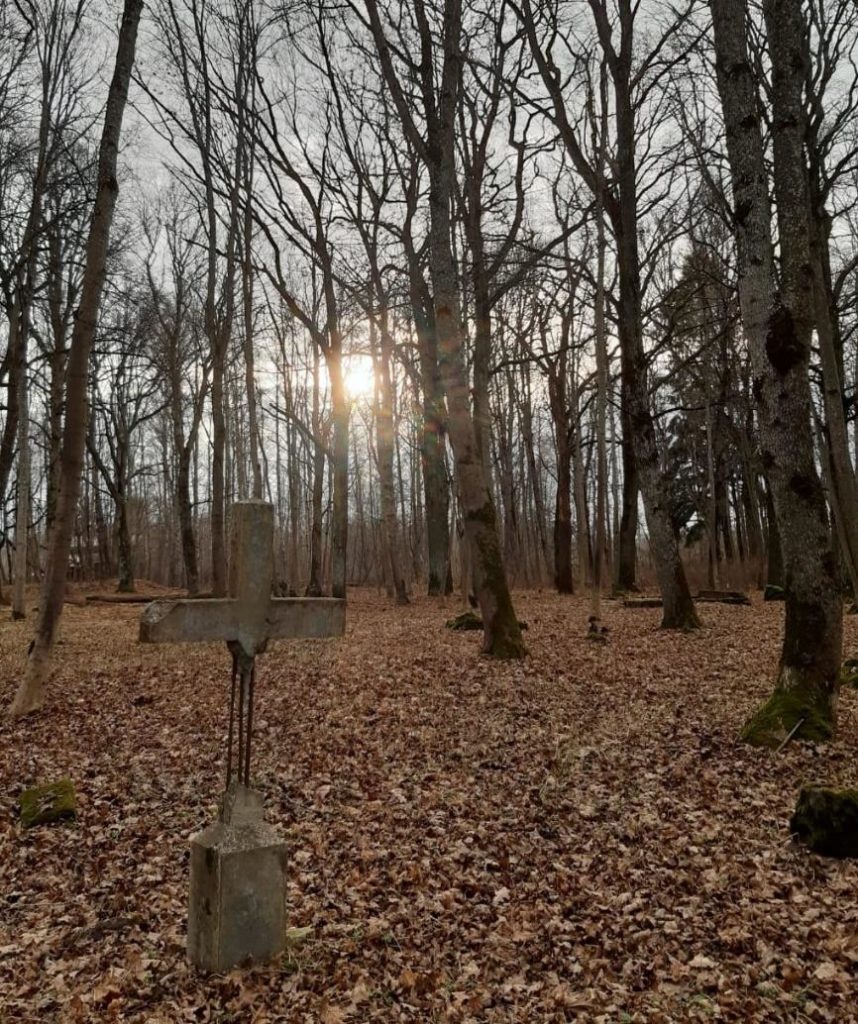 I waded through bushes and frosted leaves covering the ground and came across several tombs, some of them destroyed or fallen apart, some of them still standing, displaying German family names. In the more distant part of the cemetery, I even discovered a stone foundation layer of a chapel. 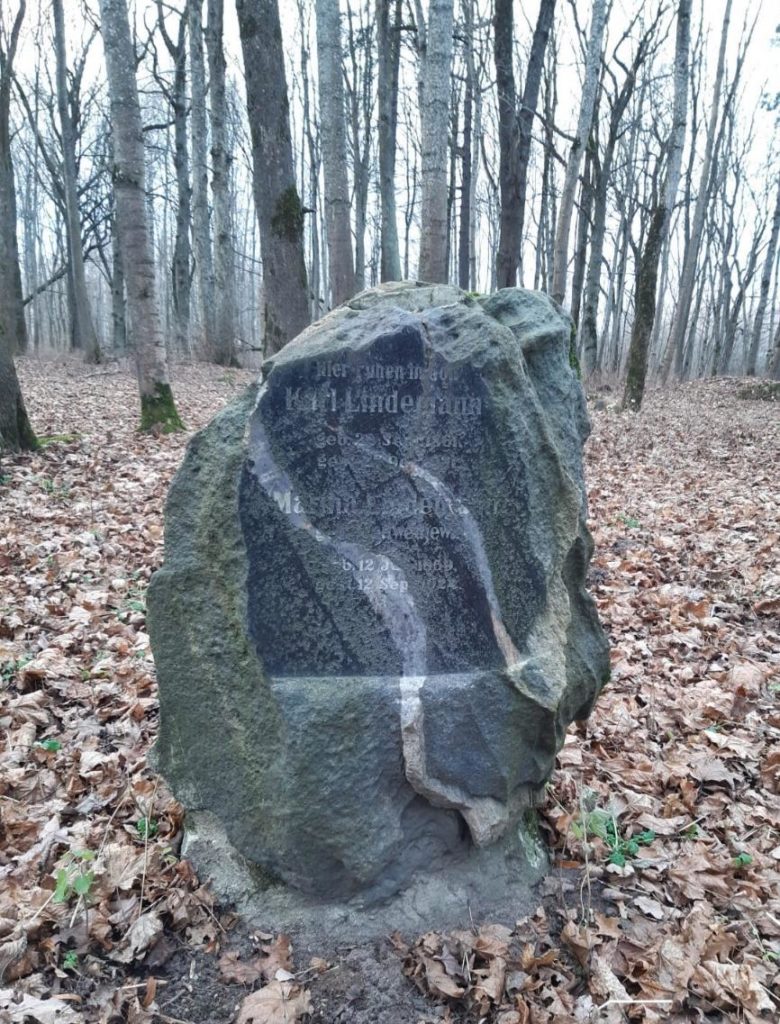 On the way back, I was haunted by many questions. What is the story behind this place and why is it left abandoned and in such a pitiful state? What role did Baltic Germans play in the history of Estonia? And are there many places like this?
Once I got home, I started looking for answers.

The Mõigu cemetery was built in 1774 and remained in use for more than 170 years until it was permanently closed and destroyed in Soviet times. Back then, the burial ground was dominated by a funeral chapel, foundation of which I probably discovered, and several grand tomb chapels for the more respectable families. The most impressive one in a classicist style decorated with sculptures belonged to the Mannteuffel family. The whole area was originally enclosed by a stone wall and a ditch, which I traced around the grove.

In the late 18th century, Russian empress Catherine the Great prohibited further burials within town boundaries in the empire as a protection from possible spreading of contagious diseases. As a result, several graveyards were established outside Tallinn, one by the lake Ülemiste near a small village called Mõigu. Since then, Baltic German families from the northeastern part of the capital along with a few ethnic Estonian families were buried there. (At that time, majority of Tallinners were Baltic Germans and they had their own noble cemeteries. There were also other, less stately ones for ethnic Estonians, Swedes and Russians.)

In 1939 based on a pact between Nazi Germany and Soviet Union, Adolf Hitler transferred most Baltic Germans from the Baltics to Western Poland, which led to a sudden decrease of burials. Members of families that refused to leave their homeland were still buried in Mõigu but the place gradually lost its grandeur and fell victim to vandalism.

Soon after the war ended, Soviet authorities took charge of Tallinn. Most of the local cemeteries were permanently closed or even destroyed, those of Baltic Germans especially, in order to renounce the heritage of the non-Russian past. Interestingly, a Russian orthodox cemetery is an exception, which remained in operation.

A cemetery of ethnic Estonians and Swedes in Kalamaja and another one of Baltic Germans in Kopli share the same dismal fate as the one in Mõigu. All of them were closed and flattened in 1951. Headstones from Mõigu were used for walls around Tallinn ports and later on, the deconstructed place was abandoned. Kalamaja and Kopli served for military purposes and then they were turned into public parks, whereas the Mõigu cemetery as their forsaken brother still keeps waiting for salvation. 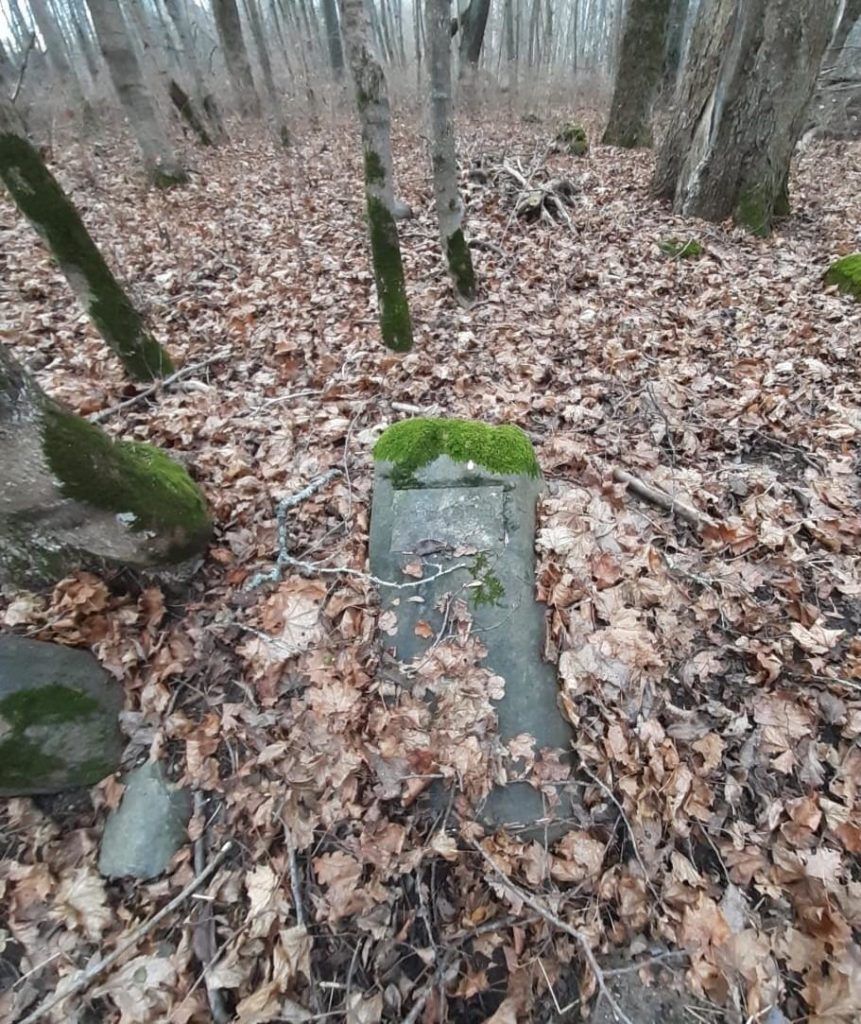 No matter the weather or lack of daylight, once you have a traveller’s heart, neither the dark and cold December in Estonia can stop you from exploring. I found my treasure in the end, a journey through time from Mõigu to the past and back. And how about you? Aren’t you curious where your feet would lead you, if you let them?